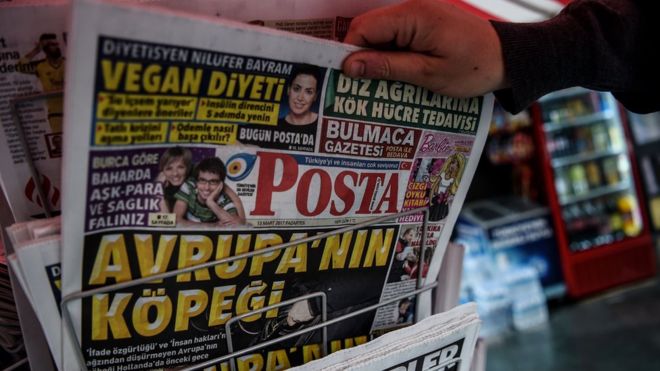 The Netherlands has warned its citizens over travel to Turkey as a row between the countries shows no sign of abating.

Axar.az reports that Germany, Austria and the Netherlands blocked Turkish attempts to hold rallies in those countries.
Turkish President Recep Tayyip Erdogan vowed retaliation, saying: "Nazism is still widespread in the West".
German Chancellor Angela Merkel rejected the comments as unacceptable and offered the Netherlands her "full support and solidarity".
On Monday, the Dutch foreign ministry issued a new travel warning, urging its citizens in Turkey to take care and noting the new "diplomatic tensions".
The warning to "avoid gatherings and crowded places" came as Turkey's foreign ministry lodged a formal protest with the Dutch envoy.
Meanwhile, the Dutch deputy prime minister, Lodewijk Asscher, said that "to be called Nazis by a regime which is walking backwards in regards to human rights is just disgusting".