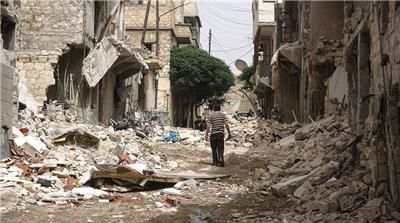 An aerial attack killed 24 civilians in a mosque during prayer time in the Syrian city of Aleppo late on Thursday, a civil defense source told.

"A warplane, which we believe was a Russian jet, bombed a mosque during prayer time in Jina village near the Al-Etarip district of Aleppo," he said.

Javad said civil defense officials tried to rescue people from the mosque's wreckage: "There were 200-300 people in the mosque [during the attack]."

He said the death toll could rise, despite efforts by civil defense teams to reach people trapped under the wreckage.

He stressed: "Attacking a mosque with a jet cannot be accepted."

Syria has remained locked in a vicious civil war since early 2011, when the regime cracked down on pro-democracy protests with unexpected ferocity.

Since then, more than 250,000 Syrians have been killed in the conflict and millions more displaced, according to UN figures.