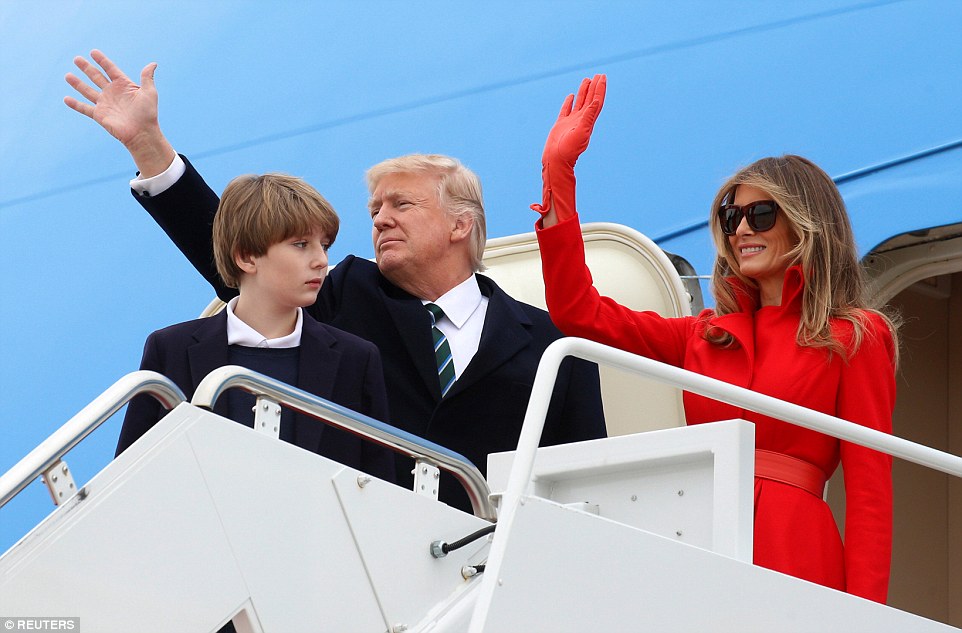 The First Family touched down in Air Force One at West Palm Beach on Friday afternoon and headed straight to President Trump's Mar-a-Lago resort, for the fifth time since he took office.

Punching a fist in the air for the cameras as he disembarked, Trump led his wife Melania and son Barron to the presidential motorcade, where they were whisked to his luxury resort - the so-called Winter White House.

Despite another tumultuous week in Washington, attention was focused not on the president but on his glamorous wife Melania.

She stood out from her navy-blue clad boys in a stunning red coat dress designed for her by Alice Roi that was cinched with an equally gorgeous red leather belt and gloves by the same designer.

And if the styling looked familiar, that is because the First Lady wore Alice Roi to the National Prayer Service in January, the day after her husband's inauguration.

The look was finished off with her favorite pair of Gucci sunglasses and tan suede heels by Jimmy Choo.

Earlier, Barron had made a rare appearance at the White House on Friday, his first since his father took office almost two months ago in January.

The 10-year-old son of President Trump was photographed while making his way across the White House lawn for the first time, where he boarded Marine One with his mom and dad.

Barron got a chance to check out the White House earlier that day after it was confirmed that the middle school student and his mom Melania would be making 1600 Pennsylvania Avenue their primary residence starting in June.

His time in DC was brief however, and after Marine One dropped him and his folks of at Joint Force Andrews it was on to Air Force One and off to Mar-a-Lago for Barron, who spends most winter weekends in Palm Beach.