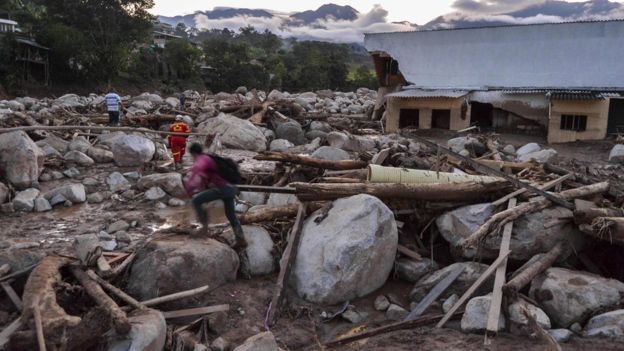 Colombia's security forces say they are searching for hundreds of missing people after heavy mudslides left at least 254 dead.

About 1,100 soldiers and police are involved in the rescue effort. Heavy rain flooded the city of Mocoa in the country's southwest with mud and rocks, burying whole neighbourhoods and forcing residents to flee their homes.

An army statement said there were at least 400 injured and 200 still missing in the capital of Putumayo province.
Colombian Red Cross volunteers in the area also put the death toll at more than 200.

The aid group said it was working to help family members contact each other, and that the operation was continuing into the night.

Video footage from the city showed residents crying over a list of missing children, along with their ages, pinned to a family welfare centre.

"We have lost a baby, who has gone missing, and the rest is as you can see," one resident told reporters. "A little baby, we can't find him anywhere."