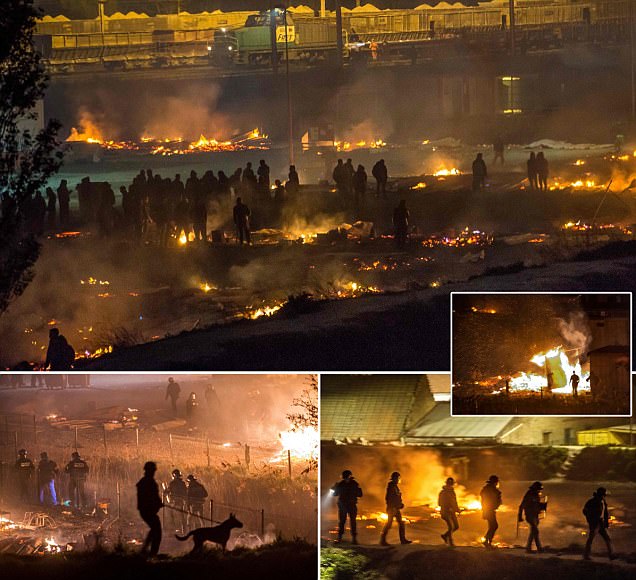 A large fire has devastated the Grande-Synthe migrant camp outside the northern French city of Dunkirk, reducing it to “a heap of ashes”, according to the region’s prefect.

Firefighters said at least 10 people had been injured on Monday night in the blaze at the camp, which was home to between 1,000 and 1,500 people, humanitarian groups said, living in closely packed wooden huts.

“There is nothing left but a heap of ashes,” said Michel Lalande, prefect of France’s Nord region, at the site. “It will be impossible to put the huts back where they were before.”

The blaze broke out after at least six migrants were wounded after scuffles and a knife fight earlier in the day between Afghan and Kurdish migrants. Riot police intervened and that led to further clashes between security forces and between 100 and 150 migrants.

One of the injured migrants was knocked over by a car on a highway outside the camp and was in a critical condition, police said. Three other migrants had stab wounds.

A massive plume of smoke rose from the camp into the night sky and was visible from several kilometres away.

“Many of the cabins have burned down or are still on fire, more than half the camp has been destroyed,” a spokesman at the regional prefect’s office said, adding that 165 people had already been taken to makeshift shelters nearby as the fire continued to rage in the early hours of Tuesday.

The incident will again focus attention on the government’s immigration policy as it tries to negotiate Britain’s exit from the European Union. David Davis, the Brexit secretary, has said that immigration could increase even after Britain leaves the EU, raising the prospect that migrants could still continue to gather in northern France for years to come.

French officials said in mid-March that security forces were planning to start dismantling the camp following clashes at the site.

The population of the Grande-Synthe camp has swelled since the destruction last October of the Calais refugee camp, about 25 miles (40km) away.

For more than a decade, France’s northern coast has been a focal point for refugees and migrants trying to reach the UK, with French authorities repeatedly tearing down camps in the region.

There have been several violent incidents at the Grande-Synthe camp, with police intervening last month after five men were injured in a fight. Another man was stabbed in November.

Last week, migrants from Grande-Synthe had tried to block the nearby highway with tree trunks and branches to try and stop the traffic and clamber onto the trucks and cars in the hope of reaching the UK.