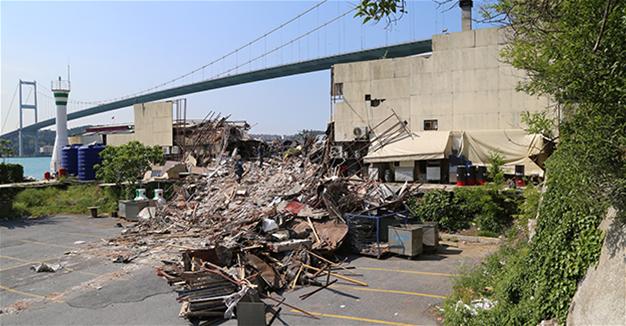 Istanbul’s famous Reina nightclub, in which 39 people were killed in an Islamic State of Iraq and the Levant (ISIL) attack on Jan. 1, was demolished on May 22.

In a statement, the Istanbul Municipality said some parts of the nightclub had been built against the law.

“A demolishment decision by the Istanbul Municipality Board has been made for the entertainment venue Reina, located in the Ortaköy neighborhood of the Beşiktaş district, as some parts of it were built against the law. In accordance with the board decision, the demolition process was completed today for the parts of the building that were breaching the law,” it said on May 22.

A source close to Reina expressed surprise at the demolition.

“This is an unexpected situation for us too. The demolition process took 45 minutes. They demolished it and left,” the source said early May 22.

ISIL staged the attack on the famous nightclub at the heart of Istanbul in the early hours of 2017.

Uzbek-origin Abdulkadir Masharipov, the attacker, escaped from the scene following the attack.

He was captured on Jan. 16 in Istanbul’s Esenyurt district, along with four other people, including a man of Kyrgyz origin and three women.

Not long after the attack, one of the co-owners of the nightclub said he no longer wished to provide entertainment in a place in which a total of 39 people died.

“Because of the villains, we sent bodies all over the world. I don’t want to sell entertainment in a place in which many people died. There are also many wounded people,” Ali Unal said.