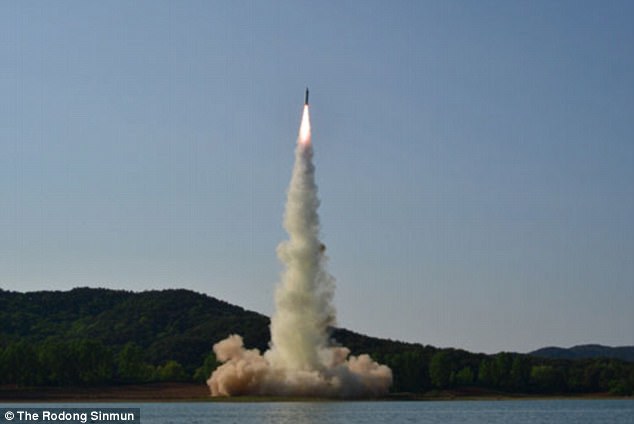 South Korea fired warning shots at an unidentified 'projectile' that flew over the border from the North, its military said.

South Korean soldiers army fired around 90 machine gun rounds into the air and towards the North, its state media reported.

South Korea's Joint Chiefs of Staff said the military has bolstered its air surveillance and broadcast a warning to North Korea in response to the object.

The army provided no other details but local media has speculated the object could have been a North Korean drone.

The Koreas face off across the world's most heavily armed border, and the two sides occasionally clash.

In 2014, the countries traded machine gun fire after South Korean activists released anti-North propaganda balloons across the Demilitarized Zone that separates the Korean Peninsula, though no casualties were reported.

Despite threats of tougher US sanctions over its aggressive tests, the nation's dictator is pressing on with his nuclear programme with today's launch the 10th of the year following on from dozens in 2016.

Its official, speaking from Saudi Arabia where President Donald Trump is on a visit, said: 'We are aware that North Korea launched an MRBM.

'This system, last tested in February, has a shorter range than the missiles launched in North Korea's three most recent tests.'

North Korea, which is working on a nuclear-tipped missile capable of striking the US mainland, has defied all calls to rein in its nuclear and missile programmes, even from its lone major ally China.

Its diplomat Ju Yong Chol told the UN recent missile tests are a legitimate act of self-defence by a 'fully-fledged nuclear power' and are not against international law.

He added: 'It is the United States' hostile policy and its aggressive joint military drills, nuclear threats and military build-up around the Korean peninsula that really aggravates the situation on the Korean peninsula and the region and which compels the DPRK to also up its nuclear deterrence.'

U.S. Ambassador Robert Wood responded that it was 'ridiculous' to claim North Korea's actions were legal.