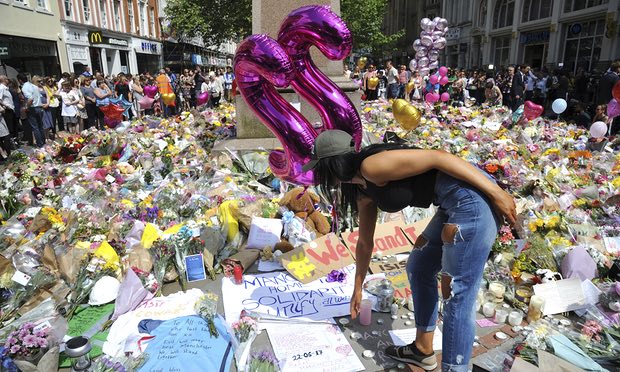 Fundraising pages set up for the families of those killed in the Manchester attack have raised more than £2.3m in an outpouring of compassion for victims.

More than 200 people have set up JustGiving pages for individual victims of the terrorist atrocity, which left 22 people dead and more than 60 injured.

Members of the public have also set up 185 pages to raise money for all the victims of the attack. JustGiving said all the money raised by individuals for specific victims was being held in quarantine while checks were carried out to ensure the fundraisers were legitimately raising money for families.

The money raised so far does not include a pledge of £1m from the city’s two football clubs.

A spokesman for JustGiving said in most cases where fundraising pages had been set up for individual victims, the company would work with Greater Manchester police to try to pass the money straight to the families rather than to the fundraisers.

The money raised includes donations to an appeal set up by the Manchester Evening News and another by the British Red Cross. These have reached £1.3m and £808,000 respectively.

JustGiving emailed fundraisers on Wednesday night to inform them that the money would be placed in quarantine while checks were carried out to verify that those behind the fundraising had connections with the families involved and were not involved in any fraudulent activity.

“We will start speaking to the individuals who have set up pages for specific victims about whether they have personal links with the families,” said a spokesman for JustGiving. “We are working with Greater Manchester police and we think in the vast majority of cases the page owner will say can you pass the money on.

“None of this money will be released until we are satisfied and if someone refused to allow us to pass money on to the families ourselves then obviously that would raise concerns with us.

“In 99 out of 100 cases crowdfunding pages are set up by friends of the families, people with a connection to the family, but it is slightly different with the Manchester attack because there has been an outpouring of compassion from people who might not necessarily know the family involved.”

“It is a very complex thing from our side because it is very hard to make judgment on someone’s intentions which is why we have taken the preventative step of putting everything into quarantine while we establish the intentions of those behind the pages,” the spokesman said.

JustGiving charges commission fees of 2% and 5% to manage the pages. The company has made a donation of £50,000 to the British Red Cross appeal page.