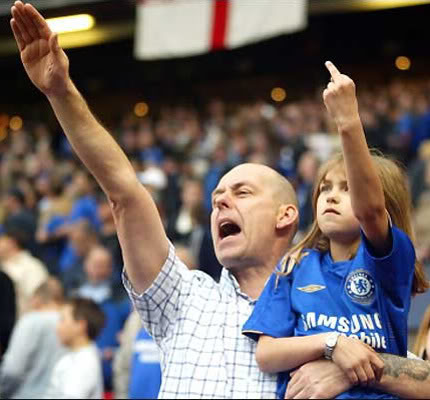 The Football Association has issued its first life bans after being shown previously unseen footage of England supporters making Nazi salutes and slit-throat gestures amid growing fears among security officials that the national team have become a focal point for a new generation of troublemakers.

Other footage showed an England follower holding a finger above his lips to imitate Hitler, in between gesturing that he would stab Germany’s supporters, during March’s game in Dortmund that became an opportunity for many travelling Englishmen to go through their repertoire of songs about the second world war.

Of 59 people identified by the UK Football Policing Unit, 20 turned out to be members of the official England Supporters Travel Club. Sixteen have now been banned for periods ranging from six months to five years and the other four have received warning letters. However, the authorities accept the real number of offenders is significantly higher and that in terms of antisocial behaviour, England have one of the worst followings of any football nation.

Intelligence reports have also revealed that many of those causing problems are aged 18 to 25 and fit a new profile of troublemaker who operate differently to the old category C hooligans and regard England’s travels with a stag-weekend culture where they take pride in behaving badly.

When officials from the travel club emailed its members after the Germany game, a 1-0 defeat for Gareth Southgate’s team that took place with a backdrop of songs such as “10 German Bombers”, they even received some replies from people arguing that what happened in Dortmund was fine. Those people are now being monitored before the World Cup in Russia next year.

Two supporters were separately identified by travel club officials making Nazi gestures and the FA is so concerned it has banned them for life, in contrast to the kind of punishments that have previously been handed out. One racist incident, for instance, in 2012, led to a supporter receiving a five-year ban. However, there are now clear indications the FA wants to take an increasingly tough stance.

Using information from its own staff, the travel club has also banned another nine members for various offences, including aggressive behaviour and ticket scams around the Germany game, with two others receiving warnings and one case pending.

A system is being introduced whereby a team of six Wembley stewards will start to travel abroad to England’s fixtures and supporters have been emailed warnings that misbehaviour will not be tolerated around the World Cup qualifier against Scotland at Hampden on Saturday. England have a 4,761-ticket allocation for what is always a high-risk fixture and, when it comes to the habit of supporters gathering in a main square, the FA wants supporters to realise that drinking alcohol in the streets is forbidden in Glasgow.

The Scottish and English football associations, along with the police, are concerned about the 5pm kick-off, designated by Uefa, and the potential for drunkenness. That, however, raises questions about why the authorities have not made a concerted push to persuade Uefa to bring it forward.

One of the other problems, namely England fans travelling without tickets, has been exacerbated by the number of supporters who have dropped out of the travel club since a controversial system was put in place in January 2014 whereby ticket-holders were offered two loyalty points for attending Wembley games and only one for going abroad with the team. That system has now been changed to two points each but the FA privately accepts it was a mistake to change it in the first place, not least because many supporters now travel independently and get tickets from touts or other means.

The travel club had 57,000 members when the new Wembley opened a decade ago. It is now down to 8,000, its lowest total, and officials have noted a substantial drop-off in the number of families. One factor is that the next two World Cups, in Russia and Qatar, have drawbacks for visiting fans. England’s poor performances in the past few tournaments have contributed as well, but the dwindling numbers are still alarming bearing in mind there were 15,000 members a year ago and closer to 30,000 at other times.