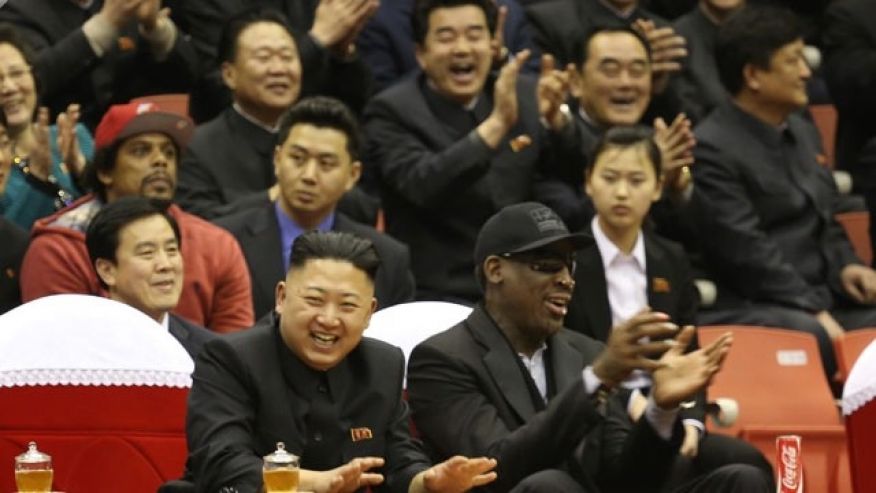 Dennis Rodman, the former NBA bad boy who has palled around with North Korean leader Kim Jong Un, flew back to Pyongyang on Tuesday for the first time in Donald Trump's presidency. He said he is "just trying to open a door" on a mission that he thinks his former "Celebrity Apprentice" boss would support.

Rodman, one of the few people to know both of the nuclear-armed leaders, sported a black T-shirt advertising a marijuana cybercurrency as he talked to reporters briefly before his flight from Beijing to the North Korean capital.

Asked if he had spoken to Trump about his trip, he said, "Well, I'm pretty sure he's pretty much happy with the fact that I'm over here trying to accomplish something that we both need."

Rodman has received the red-carpet treatment on four past trips since 2013, but has been roundly criticized for visiting during a time of high tensions between the U.S. and North Korea over its weapons programs.

His entourage included Joseph Terwilliger, a professor who has accompanied Rodman on previous trips to North Korea.

Rodman said the issue of several Americans currently detained by North Korea is "not my purpose right now."

In Tokyo, a visiting senior U.S. official said Rodman's trip is as a private citizen.

"We are aware of his visit. We wish him well, but we have issued travel warnings to Americans and suggested they not travel to North Korea for their own safety," U.S. Undersecretary of State Thomas Shannon told reporters after discussing the North Korean missile threat and other issues with Japanese counterparts.

In 2014, Rodman arranged a basketball game with other former NBA players and North Koreans and regaled leader Kim Jong Un with a rendition of "Happy Birthday." On the same trip, he suggested that an American missionary was at fault for his own imprisonment in North Korea, remarks for which he later apologized.

A foreign ministry official who spoke to The Associated Press in Pyongyang confirmed Rodman's visit was expected but did not provide details. He spoke on condition of anonymity because the ministry had not issued a formal statement.

Any visit to North Korea by a high-profile American is a political minefield, and Rodman has been criticized for failing to use his influence on leaders who are otherwise isolated diplomatically from the rest of the world.

Americans are regarded as enemies in North Korea because the two countries never signed a peace treaty to formally end the 1950-53 Korean War. Thousands of U.S. troops are based in South Korea, and the Demilitarized Zone between the North and South is one of the most heavily fortified borders in the world.

A statement issued in New York by a Rodman publicist said the former NBA player is in the rare position of being friends with the leaders of both North Korea and the United States. Rodman was a cast member on two seasons of Trump's "Celebrity Apprentice."

Rodman tweeted that his trip was being sponsored by Potcoin, one of a growing number of cybercurrencies used to buy and sell marijuana in state-regulated markets.

North Korea has been hailed by marijuana news outlets and British tabloids as a pothead paradise and maybe even the next Amsterdam of pot tourism. But the claim that marijuana is legal in North Korea is not true: The penal code lists it as a controlled substance in the same category as cocaine and heroin.

Americans have been sentenced to years in North Korean prisons for such seemingly minor offenses as stealing a political banner and likely could not expect leniency if the country's drug laws were violated.