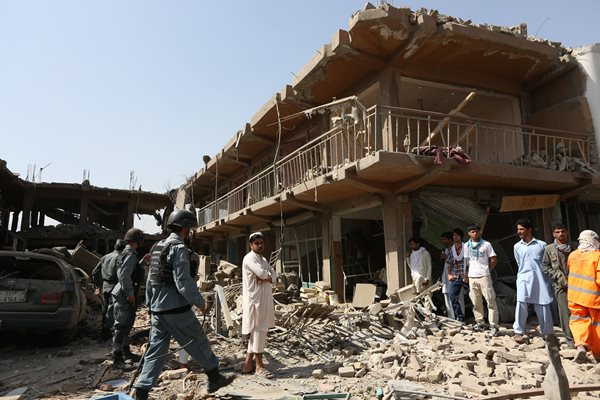 Five Afghan police officers were killed and 18 people were wounded in a Taliban attack Sunday on a major base in the eastern province of Paktia, Afghan officials said.

Axar.az reports ciitng The New York Times.
The attack on Spin Ghar region’s police headquarters began when a suicide bomber detonated a car full of explosives at the gate of the compound, creating a breach, officials said.
Another car drove through the gap, and at least three attackers emerged and began shooting at police officers, according to accounts from Asadullah Sherzad, commander of the 303rd Spin Ghar Police Zone, and from Najibullah Danish, the spokesman for the Afghan Interior Ministry.
The police said they killed most of the attackers, but that at least one remained holed up inside, firing at Afghan forces.
The Spin Ghar base is home to regular police, a Special Forces police unit and a regional headquarters, Commander Sherzad said. The wounded included nine police officers and nine civilians, he said.
Toryalai Abdyani, Paktia Province’s police chief, said there had been seven attackers and that the police had killed six of them.
A Taliban spokesman, Zabihullah Mujahid, claimed responsibility for the attack on the group’s behalf in a WhatsApp message distributed to journalists. He claimed that 100 police officers had been killed or wounded, but there was no evidence to support that assertion.
In April, 10 Taliban attackers gained entrance to the headquarters of the Afghan National Army’s 209th Corps in northern Afghanistan, rampaging through the base and killing more than 160 soldiers, many of whom were unarmed.