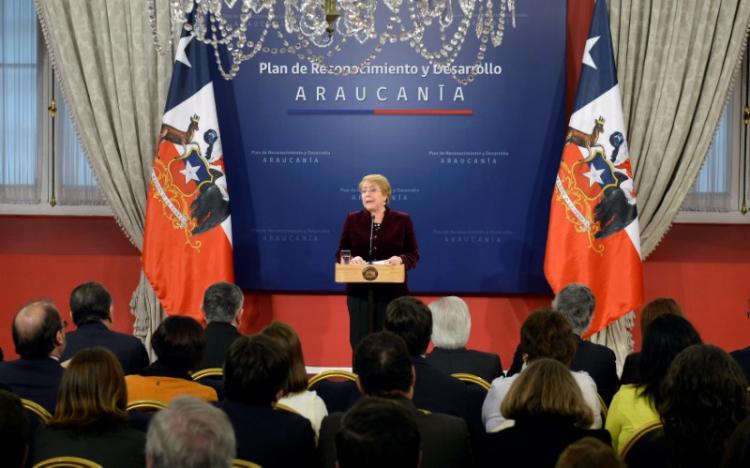 President Michelle Bachelet asked for forgiveness from Chile's indigenous Mapuche people on Friday for "errors and horrors" committed by the state and announced plans to give them more power and resources.

In the midst of growing tension between the Mapuche and loggers and farmers in Chile's south-central provinces, the center-left president said she would send a project to Congress creating an Indigenous Peoples' Ministry.

Cash would be dedicated to building roads and providing drinking water in remote areas, as well as programs to more rapidly transfer land to indigenous people that they claim as their ancestral home, she said.

"I want, solemnly and with humility, to ask forgiveness from the Mapuche people for the errors and horrors committed or tolerated by the state in our relation with them and their communities."

Around 600,000 Mapuche live in Chile, many in the forested, hilly provinces of Araucania and Bio Bio, roughly 400 miles south of Santiago.

Ever since the Chilean army invaded the territory of the Mapuche in a brutal campaign in the late 1800s, Mapuche relations with the state and settlers of European descent have been fractious.

The Mapuche accuse the state and private companies of taking their ancestral land, draining its natural resources, and using undue violence against them. Their communities are among the poorest in Chile.

In recent years, acts of arson against forestry companies and other industries, often attributed to disgruntled Mapuche, have accelerated in the region.

While Bachelet's announcement will likely draw support from some Mapuche and elements of her base, it may not be welcomed by industry groups and tough-on-crime conservatives in Chile's divided south. Several congressmen from Araucania and Bio Bio did not attend Bachelet's ceremony in protest.

The new measures closely follow an announcement by the Vatican that Pope Francis will visit Chile in 2018, a trip that will include a visit to the heavily Mapuche city of Temuco.

"We will have, I hope, good news to give him," Bachelet said.