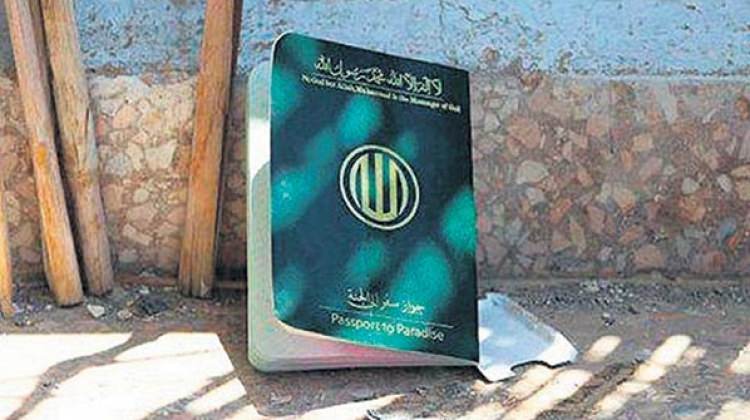 Passport to heaven, anyone? ISIS militants have been using yet another tactic to brainwash terrorists to carry out attacks across Syria and Iraq.

Recently Syrian Defense Forces discovered copies of “passports to heaven” in the liberated areas of Raqqa.

ISIS was issuing “passports” to encourage terrorists to carry out suicide attacks, become martyrs and go straight to paradise.

​The brainwashed terrorists were made to believe that they will be rewarded with virgins in heaven if they die protecting the terrorist organization across Syria and Iraq and particularly in Raqqa where the battles for its liberation are raging.

With a passport in hand the prospect of traveling straight to heaven seemed like a good reward for many of the militants who carried out deadly attacks, a recent one being in Baghdad where a bomb explosion near an ice cream shop killed 15 and injured 50 civilians. The passports were professionally printed in green and gold and contained scriptures from the Quran in both English and Arabic.

The passports did not, however, contain any personal information about the holder of such a document. The passports contained different names of Heaven and Hell written in Arabic on the inside. Earlier there were reports that ISIS has recently ordered its fighters to stop using social networks and that represented a shift in tactics following the loss of huge areas of territory.

The terrorists used social networks to brainwash fragile minds into joining their ranks and serve under ISIS leader Abu Bakr al-Baghdadi who was a self proclaimed leader of the organization.

"According to the Russian Defense Ministry, it is highly likely that ISIS leader al-Baghdadi was eliminated as a result of a Russian Aerospace Forces strike on the terrorists' command post in the southern suburb of the city of Raqqa in late May this year," Russian Deputy Foreign Minister Oleg Syromolotov told Sputnik last Thursday.

Last Thursday the US-led coalition reported the death of another senior ISIS leader, Turki al-Binali, in airstrike in Syria. Turki al-Binali was a key figure in ISIS's online and social media presence and was able to recruit more fighters into the tanks of the terrorist organization. His death was a significant blow to ISIS.