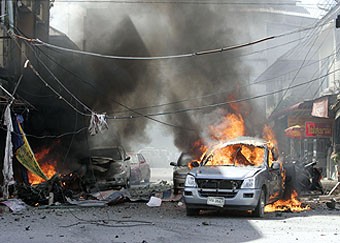 A blast occurred near a bus station in Turkish city of Diyarbakir, the Haberturk TV channel reported March 31.

Reportedly, at least seven people were injured in the explosion.

Witnesses said that an explosive device caused the blast.

Ambulances have been dispatched to the incident scene.

Four policemen were killed as a result of the explosion in Turkish city of Diyarbakir, Haberturk TV channel reports.

The death toll as a result of the explosion in Turkish city of Diyarbakir rose to six, Haber 7 TV channel reported.

The blast has injured 23.