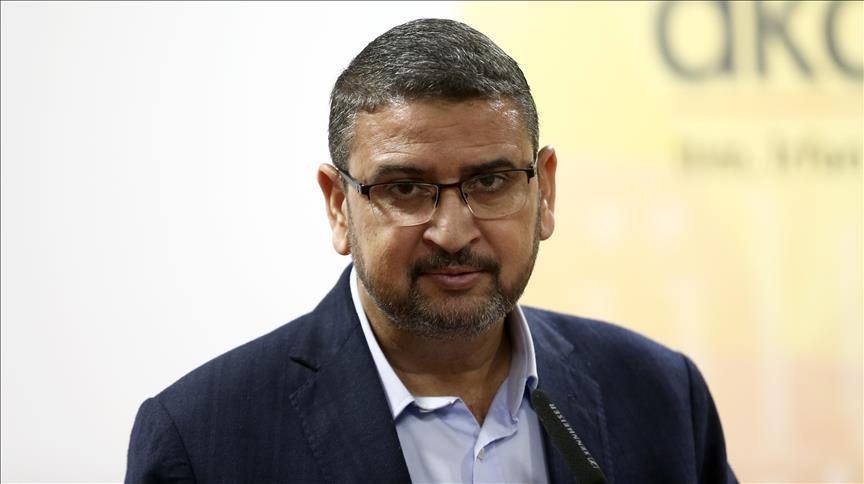 "This strong relationship reflects the Turkish leadership's keenness to support the Palestinian cause and Palestinians’ rights," Abu Zuhri told Anadolu Agency in an exclusive interview in Istanbul on Thursday.

He went on to assert that the Turkish leadership had also “exerted tremendous effort to support the inter-Palestinian reconciliation process".

"A meeting was convened in Turkey to inform the Turkish leadership of what had been agreed to in Cairo,” Abu Zuhri said.

“They [the Turkish leadership] voiced their satisfaction with the apparent success of the reconciliation initiative," he added.

If it holds, the deal will allow the Fatah-led Palestinian government in Ramallah to assume political and administrative control of the Gaza Strip, which has been run by Hamas since 2007.

In his remarks, Abu Zuhri reiterated his group’s desire to see the Palestinian reconciliation process succeed.

"The [Ramallah-based] consensus government has smoothly taken over all of Gaza’s ministries and [border] crossings," he said.

"The government is now expected to assume full civilian control of the Gaza Strip," he added. "Hamas no longer retains any civilian responsibility [for Gaza].”

Abu Zuhri, however, went on to urge the Ramallah government to lift all the sanctions it had recently imposed on the coastal enclave.

Notably, despite the recent thaw in relations between Hamas and Fatah, Ramallah has yet to reverse a raft of sanctions imposed on Gaza earlier this year.

According to Abu Zuhri, while the Cairo agreement calls for a security delegation to be sent from Ramallah to Gaza to finalize details of an expected security handover, “this has yet to be done”, the Hamas spokesman said.

"We urge the government not to be selective and to implement all aspects of the agreement," he added.

Regarding the sensitive issue of Hamas’s formidable weapons arsenal, Abu Zuhri stressed that Hamas would not lay down its arms as long as Israel continued to occupy Palestinian territory.

"The weapons of the resistance are holy,” he stated. “We will maintain our arsenal until the occupation is extirpated from our land."

Regarding Hamas's recent rapprochement with Iran, Abu Zuhri said: "The relationship has recently witnessed a thaw; both sides are keen to improve ties with a view to serving the Palestinian people and cause."

"Tehran openly declares its support for the Palestinian resistance,” he stated. “This is very important to us in light of the grand conspiracy against the resistance project.”

He added: "Our door remains open to all Arab and Islamic countries on the basis that the Palestinian issue remains a major cause of concern for the entire Muslim Umma [nation]."

Following the election in May of Ismail Haniyeh as the group’s political chief, Hamas began adjusting its regional policies. One of these changes was the restoration of ties with Iran and its Lebanese ally, Hezbollah.

In a press statement issued during the visit, al-Arouri declared that Hamas sought "to maintain close ties with Iran and to maintain its arsenal".

In yet another sign of rapprochement, al-Arouri held a rare meeting in Beirut with Hezbollah chief Hasan Nasrallah one week later.

As for recent reports of secret meetings between certain Arab leaders and Israeli officials, Abu Zuhri said: "This information is very serious; we call for an end to such behavior."

"Arab policy should be consistent with the rights of the Palestinian people,” he said. “Any normalization between Arab states and the [Israeli] occupation will inevitably come at the expense of our cause."