More than 13 million Syrians in need of aid 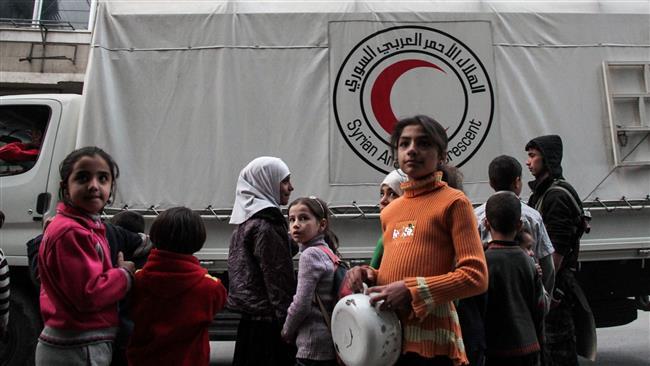 The United Nations says more than 13 million Syrians are in need of aid despite a relative drop in fighting between the government troops and foreign-backed militant outfits in the war-torn Arab country in recent months.

“Entering the seventh year of the crisis, the scale, severity and complexity of needs across Syria remain overwhelming,” the statement further read.

In late October, it made a similar announcement, saying conflict and violations of international humanitarian law continued to be the main drivers of humanitarian need, with civilians in many parts of the Middle Eastern country enduring “massive suffering.”

However, Under-Secretary-General for OCHA Mark Lowcock said at the time that some 6.3 million were in “acute need” of aid. The figure shows that the relative drop in violence has also helped the government and the charity groups to deliver aids to some seven hundred thousand people, who were in desperate need of assistance.

Back in May, the fourth round of the intra-Syrian talks, held in Kazakhstan's capital, Astana, resulted in an agreement on creating four de-escalation zones across Syria, with Russia, Iran, and Turkey serving as guarantor states. The safe zones cover the Syrian provinces of Idlib and Homs as well as the Eastern Ghouta region near Damascus and the country’s southern border with Jordan. They have sharply reduced fighting in the conflict zones.

The UN says 40 percent of the needy are children, noting that people in besieged or so-called “hard-to-reach” areas are particularly vulnerable.

According to the UN figures, over 330,000 people have lost their lives in Syria since the foreign-back militancy began its reign of terror in 2011. The world body also says that the violence has already displaced over half of Syria’s 18 million-strong population, both internally and abroad, as refugees.