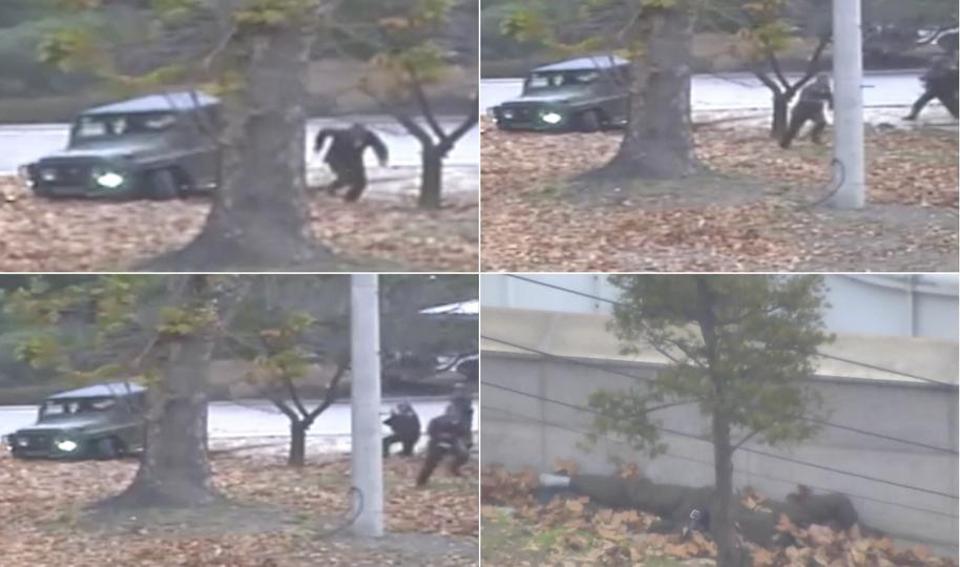 Dramatic video showing a North Korean soldier fleeing across the border into South Korea while being shot at by his former comrades was released by the United Nations Command Wednesday.

A North Korean defector darts across the DMZ dividing the two Koreas in this screenshot of handout video provided by the United Nations Command.

By firing across the DMZ at the defector, North Korean soldiers violated the Korean War armistice, said the UN Command, which oversees the 64-year-old ceasefire agreement. One North Korean soldier also crossed the military demarcation line (MDL) -- another violation of the armistice that paused the Korean War in 1953 -- said Col. Chad Carroll, US Forces Korea public affairs director. A peace treaty formally ending the war has never been signed.

Carroll said that the UN Command had notified the North Korean People's Army of the violations via regular communication channels and requested a meeting to discuss the results of the UN investigation into the incident as well as measures to prevent future such violations.
"The armistice agreement was challenged, but it remains in place," Gen. Vincent K. Brooks, the American who leads the UN Command.

The 24-year-old soldier, surnamed Oh, has regained consciousness and is undergoing further treatment, the hospital treating him said Wednesday. He's been listening to South Korean and Western music and watching television.

Oh, whose rank has not been revealed, is the third member of the North Korean armed forces to defect this year.

According to a document from the South Korean Joint Chiefs of Staff, North Korea has been accused of defying the armistice thousands of times since 1953, though not all the violations are nearly as dramatic as a shootout caught on camera.

North Korea claims the South has also breached the armistice thousands of times.