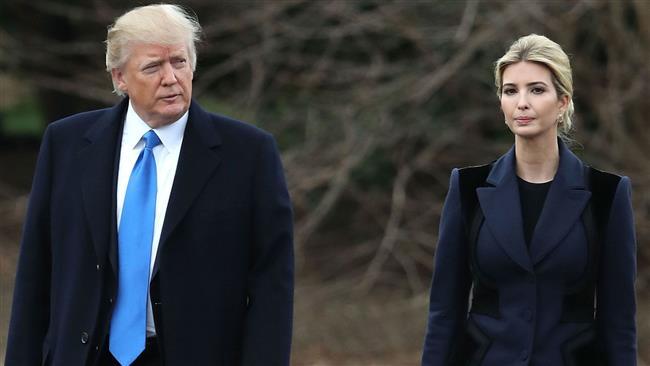 US President Donald Trump is reportedly frustrated with his daughter, Ivanka, for condemning Senate hopeful Roy Moore, who is accused of sexual harassment against women and girls.

“There’s a special place in hell for people who prey on children,” Ivanka said in an interview with the Associated Press on Wednesday, referring to reports about 70-year-old Moore’s alleged record of pursuing sexual relationships with teenagers when he was in his early 30s.

“I’ve yet to see a valid explanation and I have no reason to doubt the victims’ accounts,” she added, contrasting her father, who has stood by the Republican who is faced with a tough task defeating Democratic rival Doug Jones, in a special election next month.

“Do you believe this?” the president asked several aides in the Oval Office after reading the interview, The New York Times reported Saturday.

So far, nine women have come out against the Republican hopeful, who has lost many endorsements from his fellow party members.

Earlier this month, The Washington Post published the first case. The report accused more Moore of taking Leigh Corfman, now 53, into his house in the woods near Gadsden, when she was 14 years old, and abusing her by removing her shirt and pants.

Trump, however, has questioned the sexual misconduct claims.

“Forty years is a long time. He’s run eight races, and this has never come up,” Trump told reporters on Tuesday. “He says it didn’t happen… You have to listen to him, also.”

Moore has rejected growing calls to back out of the race, which if lost would narrow the Republican Senate majority to a single seat.

Meanwhile, Jones’ campaign has already made the best use of Ivanka’s remarks, using them in the Democratic hopeful’s campaign ads.

The scandal has seen Jones gain popularity, helping him get closer to a rare victory in the in the Deep South.

According to the latest Real Clear Politics poll, Jones is leading more 46.8 percent to 46 percent in terms of support among Alabama voters.