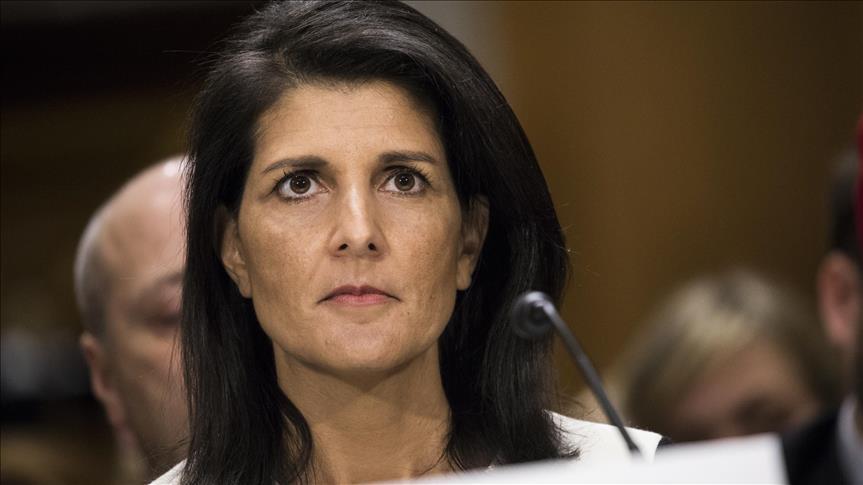 As many as 128 nations at the United Nations General Assembly, including India, voted in favour of a non-binding resolution declaring US action on Jerusalem "null and void," - effectively denouncing Donald Trump's recognition of the ancient city as Israel's capital.

Axar.az reports that nine countries, including the US and Israel, voted against the resolution. 35 abstained and 21 were absent.

The US has said the vote won't affect its plan to move the US Embassy in Israel to Jerusalem. But US Ambassador to the UN Nikki Haley said it would affect the way Americans look at the United Nations. This vote will be remembered," she warned.

Here are 10 top quotes from Nikki Haley's remarks before the vote.

1. A DAY TO REMEMBER: The United States will remember this day in which it was singled out for attack in the General Assembly for the very act of exercising our right as a sovereign nation.

3. STICKING TO THE PLAN: America will put our embassy in Jerusalem. That is what the American people want us to do, and it is the right thing to do. No vote in the United Nations will make any difference on that.

4. AMERICAN VIEW: This vote will make a difference on how Americans look at the UN and on how we look at countries who disrespect us in the UN. And this vote will be remembered.

5. DUBIOUS PRIVILEGE: When we make generous contributions to the UN, we also have a legitimate expectation that our good will is recognized and respected. When a nation is singled out for attack in this organization, that nation is disrespected. What's more, that nation is asked to pay for the "privilege" of being disrespected. In the case of the United States, we are asked to pay more than anyone else for that dubious privilege.

6. ACCOUNTABILITY: Unlike in some UN member countries, the United States government is answerable to its people. As such, we have an obligation to acknowledge when our political and financial capital is being poorly spent.

7. HOSTILE PLACE: To its shame, the United Nations has long been a hostile place for the state of Israel.

8. CREDIBILITY: Both the current and the previous Secretary-Generals have objected to the UN's disproportionate focus on Israel. It's a wrong that undermines the credibility of this institution, and that in turn is harmful for the entire world.

10. DEFENDING IDEALS: Israel must stand up for its own survival as a nation; but it also stands up for the ideals of freedom and human dignity that the United Nations is supposed to be about.

RT @USUN: “America will put our embassy in #Jerusalem...No vote in the United Nations will make any difference on that. But this vote will make a difference on how Americans look at the @UN, and on how we look at countries who disrespect us in the UN.” pic.twitter.com/UBLFXVyouY