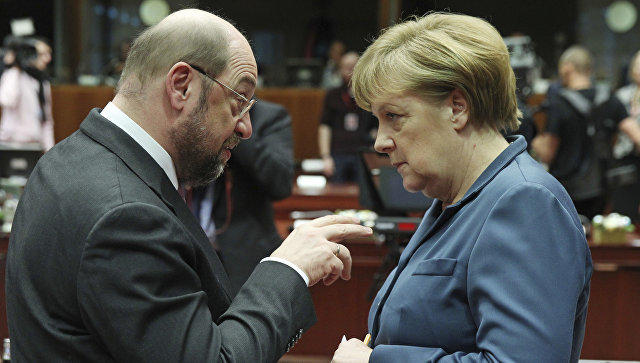 Chancellor Angela Merkel's conservatives and the Social Democrats (SPD) have agreed on a formal coalition deal, a conservative politician and a source involved in the negotiations said on Wednesday.

Another source could not confirm an agreement had been sealed, saying the parties were still at odds on some issues.

German dpa news agency reported that the parties in talks to form a new German coalition have achieved a breakthrough in distributing the ministerial portfolios, but have yet to reach final agreement.

An agreement, if confirmed, would take Germany a step closer to a new government after more than four months of political uncertainty that has weakened Germany's role in international affairs and raised questions about how long Merkel will stay in her job.

During the course of a mammoth 20-hour session of talks, it seems the SPD was able to retain the Labor and Social Welfare portfolio, sources told dpa, although the conservative Bavarian-based Christian Social Union (CSU) had wanted the post.

The SPD had also wanted to retain the position of foreign minister, but were also demanding the finance portfolio which was formerly held by Chancellor Angela Merkel's Christian Democrats (CDU), of which the CSU is a sister party.

Reporting that the SPD will take the foreign, finance and labor ministries in a new government, Bild newspaper said that the CDU will get the economy and defense portfolios.

Bild, which did not cite its sources, said Merkel's Bavarian ally Horst Seehofer - who takes a tough line on immigration - would become interior minister.

The CDU/CSU and SPD are meeting for a third day of extended negotiations after a weekend deadline passed to revive the so-called grand coalition that has governed Germany since 2013.

However, any deal will still be subject to approval by the SPD's 464,000 members, who must approve it in a postal ballot before their party can move ahead and join another coalition with Merkel after serving as her junior partner from 2013.