Serbia will not support the anti-Russian hysteria 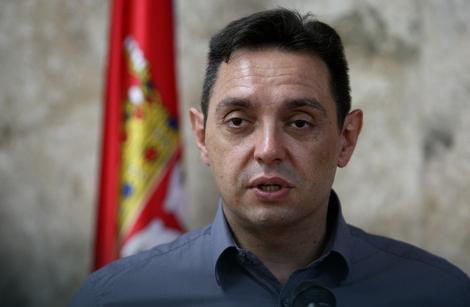 Serbia will neither join sanctions on Russia nor support anti-Russian hysteria until Aleksandar Vucic heads the country, Serbian Defense Minister Aleksandar Vulin said at a meeting with his Russian counterpart Army General Sergei Shoigu ahead of the Seventh Moscow Conference on Global Security.

"Russia can rest assured that until Aleksandar Vucic is Serbian President, Belgrade will neither impose sanctions on Moscow nor participate in anti-Russian hysteria," he said.

Vulin pointed to the brotherly nature of relations between the two countries and asked the Russian defense minister to convey the Serbian people and President Vucic’s congratulations to Russian President Vladimir Putin on his "big democratic election win."

While speaking about military cooperation between Serbia and Russia, Vulin noted that it "is progressing at a speed that we agreed on."

Shoigu, in turn, pointed out that the two countries’ defense ministers held meetings several times a year, which positively affected bilateral military cooperation. "I have warm memories of the celebrations dedicated to the 73rd anniversary of Belgrade’s liberation from Nazi occupation, held last year - it was an important event for Russian-Serbian relations and for me personally. It once again proved good and I would say brotherly relations between our people. I hope they will remain like that," the Russian defense minister added.

"I expect that tomorrow we will have a chance to discuss the most pressing global security issues," Shoigu noted.

The Seventh Moscow Conference on Global Security is scheduled to be held on April 4-5.