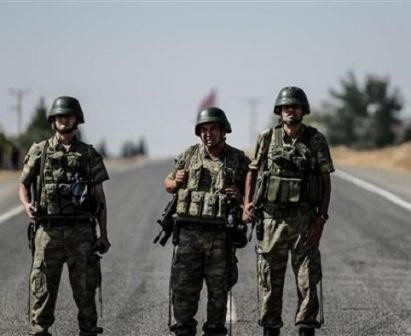 Two Turkish soldiers were killed and four wounded on Monday in an armed attack by Kurdish militants in the southeastern Turkish town of Nusaybin near the Syrian border, the armed forces said in a statement.

Security sources earlier told Reuters that one soldier had been killed and three wounded in the attack, which they said had involved explosives.

The armed forces said in a separate statement that on Sunday 15 militants from the outlawed Kurdistan Workers Party (PKK) had been killed in clashes in Nusaybin and the towns of Sirnak and Lice, also in the southeast.

Thousands of militants and hundreds of civilians and soldiers have been killed since the PKK resumed its insurgency last summer after a 2-1/2-year ceasefire, shattering a peace process.

The government has ruled out any return to the negotiating table and has vowed to crush the PKK, which is considered a terrorist organization by Turkey and its Western allies.

More than 40,000 people have been killed in the conflict since the PKK took up arms against the state in 1984.