"Refusal from Turkish goods would be most stupid decision" 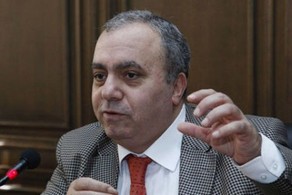 "Adopting a decision on refusal from Turkish goods we will suffer the most. We are of less importance for Turkish producers. We live at the expense of Turkish budget, refusal form its goods will be the most stupid decision".

According to the Armenian media, member of the parliament's 'Armenian National Congress' faction Hrant Bagratyan said commenting on the speech of Armenian Minister of Economy, member of 'Dashnaktsutyun' party Artsvik Minasyan regarding restriction or ban of Turkish products import.

'Raising a clamour of patriotism by the power, means it has nothing to grant the people. Some goods can be replaced. This is another issue. In general, however, Russia complicated its situation by imposing sanctions on Turkish products, Armenia suffers most', H. Bagratyan stressed.