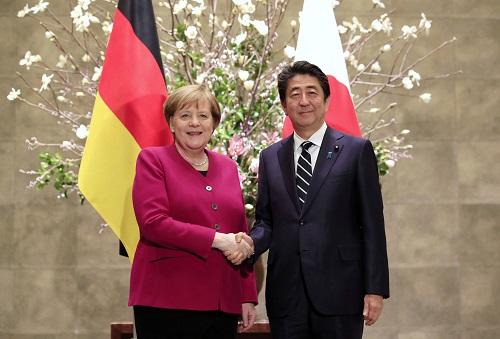 The meeting came days after the Economic Partnership Agreement between Japan and the European Union came into force.

Merkel is on a two-day visit to Japan - her first visit in three years.

During the talks on Monday, the two leaders agreed to strengthen economic ties now that the Japan-EU EPA came into effect on February 1.

They also agreed to promote cooperation in advanced technologies such as artificial intelligence and autonomous driving.

They have also reached a basic agreement on information security to improve defense cooperation.

Abe and Merkel reaffirmed they will cooperate to make the upcoming G20 summit successful. Japan hosts the event in Osaka in June.

They held a joint news conference after the talks. Abe said Japan and Germany will lead the world's largest economic zone created by Japan's EPA with the EU.

Abe said a no-deal Brexit should be avoided in order to minimize the impact of Britain's exit from the EU on the global economy.

Merkel said she and Abe have maintained good cooperative relations throughout their numerous meetings since she came to office. She wants to see cooperation with Japan in global trade and climate change with the G20 approaching.