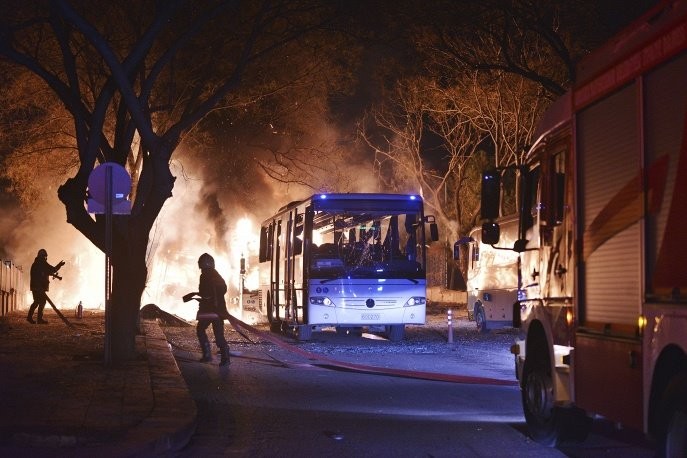 At least 28 people are dead and 61 others injured after a vehicle laden with explosives detonated during rush hour in the centre of the Turkish capital of Ankara.

The target of the blast was a convoy of military service vehicles which were waiting at traffic lights when the nearby car exploded, according to Ankara governor Mehmet Kiliclar. The car bomb exploded in the administrative heart of the capital, near the armed forces' headquarters, parliament and government buildings. Plumes of smoke were seen rising over the city and the powerful blast was heard across several neighbourhoods, sending residents rushing to their balconies in a panic.

Ambulances and fire engines were sent to the scene of the blast, which took place near a busy intersection less than 500metres from parliament during the evening rush hour. A health ministry official said the authorities were still trying to determine the number of dead and wounded, who had been taken to several hospitals in the area. Initial reports claimed just the blast killed five people and injured 10 others, but that number was raised substantially by the city's governor Mehmet Kiliclar.

The country's health minister Mehmet Muezzinoglu raised the death toll again to 21, although the country's deputy prime minister Numan Kurtulmus later raised it again to 28. Mr Kurtulmus also confirmed that the blast was caused by a car bomb and targeted military vehicles that were carrying armed forces personnel. He said seven prosecutors have been assigned to investigate the attack, which he described as 'well-planned'. Mr Kurtulmus said no group had yet claimed responsibility, but pledged authorities would find those behind the attack. 'I heard a huge explosion. There was smoke and a really strong smell even though we were blocks away,' said a witness.

'We could immediately hear ambulance and police car sirens rushing to the scene.' A second blast was reported to have followed the first, causing panic in the area. However, local media claimed this was caused by police detonating a suspicious package. Turkish Prime Minister Ahmet Davutoglu has cancelled his planned trip to Brussels following the explosion, according to an official in the prime minister's office. Mr Davutoglu was due to leave later on Wednesday for Brussels to meet a number of EU leaders on Thursday for discussions on the migrant crisis ahead of a full summit of the 28-member bloc.

Meanwhile the country's President Recep Tayyip Erdogan has postponed a visit to Azerbaijan, according to presidential sources. The spokesman for the ruling Justice and Development Party (AKP), Omer Celik, said he strongly condemned the attack, Turkish media reported.

Although reports are unconfirmed, Turkish security officials told Reuters that initial signs indicate the Kurdistan Workers' Party (PKK) insurgents were behind the attack. However, separate security sources in Turkey's mainly Kurdish southeast gave a different account, saying they believed ISIS militants were behind the bombing. The spokesman for the ruling Justice and Development Party (AKP), Omer Celik, said on Twitter he strongly condemned the 'act of terror'. 'But our determination to fight [terror] will become even greater,' he added.

ISIS has been blamed for a string of bombings in the country since the middle of last year. A blast in Ankara on October 10 last year killed 103 people. Two suicide bombers in the October attack blew themselves up in a crowd of peace activists in Ankara, the bloodiest attack in the country's modern history. An attack on January 16 also killed 11 people, all German tourists, when a suicide bomber blew himself up in the tourist heart of Istanbul. Those attacks were blamed on ISIS jihadists, as were two other deadly bombings in the country's Kurdish-dominated southeast earlier in the year. Turkish authorities have in recent weeks detained several suspected ISIS members, with officials saying they were planning attacks in Istanbul and Ankara. But Turkey, a NATO member, faces multiple security threats.