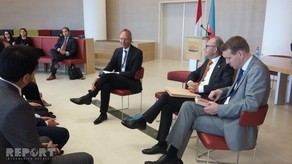 Dutch Minister for Economic Affairs, Henk Kamp, who is on a visit to Baku, has met with young entrepreneurs of Azerbaijan.

The meeting was held at the University of ADA.

At the meeting, H.Kamp said that Europe must cooperate more closely with the countries of the East, and in particular with Azerbaijan, which "is the link between Europe and China."

He also noted the importance of diversification of Azerbaijan's economy and the development of non-oil sector.

In this regard, he has cited the example of the Netherlands, where "70% of the economy accounted for small and medium businesses."

Then, the Dutch Minister listened to the views of Azerbaijani entrepreneurs about how further develop the relationship between the two countries.

H.Kamp stressed that such meetings are important to know later what steps necessary to take for strengthening the ties between the countries.