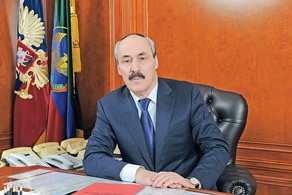 An official delegation of the Republic of Dagestan, headed by Ramazan Abdullatipov arrived in Baku.

According to the press service of the head of administration and government of Dagestan, the delegation will participate in the opening of the Days of Culture of Dagestan in Azerbaijan.

Dagestan leader R. Abdullatipov will hold a meeting with compatriots living in the country, with the Economy Minister of Azerbaijan Shahin Mustafayev and representatives of business circles of Azerbaijan, which will end with the presentation of the investment and tourism potential of Dagestan.

Signing of agreement on cooperation between the Milli Majlis of Azerbaijan and the People's Assembly of Dagestan is also planned.

Besides Baku city, the delegation will also visit Khachmaz and Gusar.