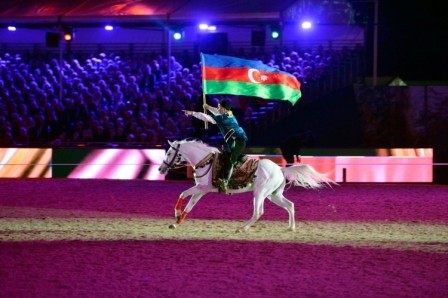 An estimated 700,000 UK television viewers have woken up to news and footage of the 15 Karabakh Horses currently participating in the Royal Windsor Horse Show with their appearance alongside popular weather presenter and equestrian Laura Tobin on the ITV show Good Morning Britain.

The participation of the horses was organised by the Azerbaijan Equestrian Federation (ARAF) and The European Azerbaijan Society (TEAS).

Lionel Zetter, Director, TEAS, was interviewed about the horses and about the role of TEAS in making sure that they were able to participate in the show. He said: “Karabakh horses are renowned for their speed, stamina and agility. They are not just show animals, but also everyday riding horses that are capable of being trained for dressage, whilst still being fast and tough enough to participate in chovkan – the Azerbaijani version of polo.”

Mr Zetter explained that TEAS had worked with ARAF to ensure that not just the horses, but also a troupe of dancers were able to make the journey from Baku to Windsor. TEAS also organised a cultural pavilion that displayed Azerbaijani costumes, and also screened videos showing Azerbaijan’s unique topography. Hundreds of visitors were also introduced to cay, Azerbaijan’s refreshing lemon tea, accompanied by paklava to the strains of live mugham music.