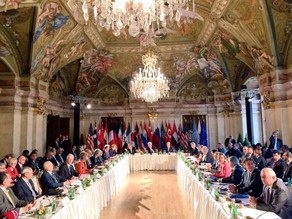 Meeting of International Syria Support Group, which is chaired by Russia and the US, has started in Vienna.

Yesterday Russian Foreign Minister Sergey Lavrov arrived in the Austrian capital and held talks with US Secretary of State John Kerry and representatives of several Syrian opposition groups as well as attended the meeting of Azerbaijani and Armenian Presidents, held with participation of the OSCE Minsk Group on settlement of Nagorno-Karabakh conflict.

During meeting, the parties will assess implementation of Russian-US agreement on the establishment of ceasefire in Syria.

The period of implementation of the agreement, its compliance control, also issues such as launch of the political process in Syria will be in the focus of attention.