Azerbaijan not to tolerate occupation of its lands 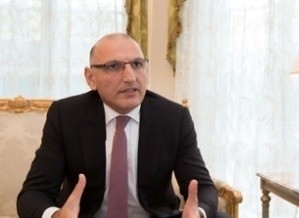 Azerbaijan will not tolerate the occupation of its territories by Armenia, Azerbaijani Ambassador to France Elchin Amirbeyov said in his interview to Vatican Radio.

According to the ambassador, it is clearly stated in the Charter of the United Nations as well as in the principles of the OSCE Helsinki Final Act that people’s right to self-determination cannot be served at the expense of violating the territorial integrity of sovereign states.

He stressed that Armenia’s annexation of the occupied Azerbaijani territories or creation of a second Armenian state there is unimaginable.

The diplomat said that the three co-chair countries of the OSCE Minsk Group—France, the United States, and Russia—are mediating the peace process, and that the group is working to find a solution acceptable to both Azerbaijan and Armenia.

The clashes in early April showed that the status quo, which has resulted from the occupation, is unacceptable and thus cannot last long, Amirbeyov noted.

“It’s quite obvious that the balance of power in political, economic, demographic and military terms has changed a lot in the region since 1994. The situation is different than two decades ago. So it’s wrong to think that Azerbaijan is going to tolerate the occupation of its territories,” he said.

The ambassador underlined the importance of concrete steps in terms of the changing the status quo.

“According to the mediators’ plan, first the districts adjacent to Nagorno-Karabakh region must be immediately liberated and Armenian armed forces must leave these territories. Communication between Azerbaijan and Armenia, as well as Turkey and Armenia should be restored to ensure the return of Azerbaijani IDPs,” Amirbeyov said.

In the end, Amirbeyov stressed that both communities of Nagorno-Karabakh should be allowed to live together in peace.

“With the conditions of coexistence provided, the predominant Armenian population and the minority Azerbaijanis may well live together. Despite the population are largely Muslim, Azerbaijan is an utterly secular state where people of varying faiths and ethnicities live together in harmony. I think Armenians too will someday benefit from this peace and live alongside Azerbaijanis like other peoples,” he concluded.