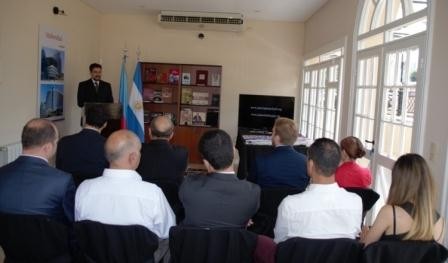 Azerbaijani embassy in Argentina hosted a commemorative event dedicated to the 24th anniversary of Khojaly genocide.

The event organized by the embassy and Azerbaijani studies department under the Institute of International Relations at the University of La Plata (Argentina) was attended by the university's staff and students who took part in the 2015 essay competition “What do I know about Azerbaijan?”.

Addressing the event, Rashad Aslanov, charge d'affaires of the embassy, gave detailed information about the history of the Armenian-Azerbaijani Nagorno-Karabakh conflict and the ongoing negotiations for a solution.

The participants were informed about the act of genocide committed with special cruelty by Armenians on February 25-26, 1992 in Khojaly town, the work done by Azerbaijan to achieve its recognition in the international arena, as well as the "Justice for Khojaly" campaign initiated by Leyla Aliyeva, the vice-president of the Heydar Aliyev Foundation.

The event highlighted the need to spread the truth about the Khojaly genocide, as well as the Armenian-Azerbaijani conflict in Argentina where the Armenian genocide is powerful.

Paulo Botta, coordinating professor of the Azerbaijani studies department, underscored the impossibility of denial of the Khojaly genocide, stressing that the Azerbaijani side seeks a peaceful solution to the conflict though more than one million Azerbaijanis have become refugees and IDPs.