Azerbaijan made progress in institutional development 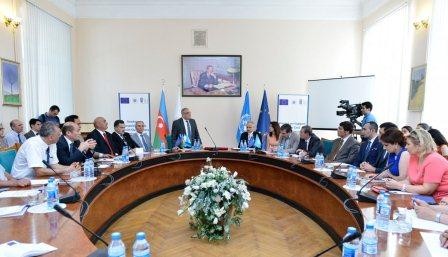 
He made the remarks during the signing ceremony of a joint project titled “Support to civil service training in Azerbaijan” in Baku July 1. The document was signed by representatives of the European Union, the UNDP and the Academy of Public Administration of Azerbaijan

Isaczai said the cooperation between the UNDP and the Academy of Public Administration has been continuing for a long time.

According to him, civil servants with strong management skills are the main factor in the development of any society.


“The 16th Sustainable Development Goal adopted by the UN is about strengthening governance. I hope that Millennium Development Goals adopted in New York in September last year will be promoted in Azerbaijan,” said Isaczai, thanking the EU for supporting the project.


Then the project was signed. Thanks to the project, about 500 people will be able to increase their knowledge and pass the appropriate training.