Brazil mayor gets in-ring to settle a political score 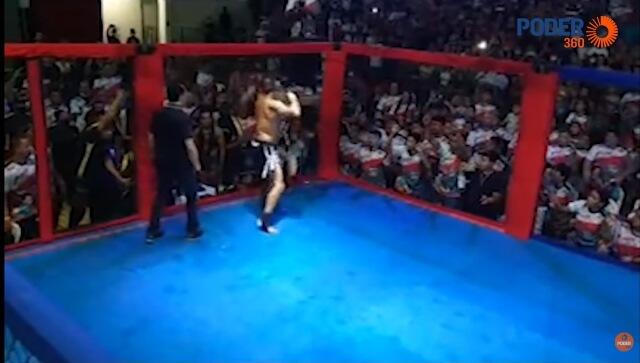 The mayor of a small Brazilian city took polarizing politics to another level when he fought a cage match to settle a score with an ex-councilman.

Axar.az reports that Simao Peixoto, mayor of the Brazilian Amazon municipality of Borba, has had a long-running beef with former city councilman Erineu “Mirico” da Silva.

The final straw, according to local media reports, came when Da Silva posted a video criticizing Peixoto's management of the Balneario does Lira, a river-beach resort that is the municipality's main tourist attraction.

When Da Silva made a video threatening the mayor with a “beat-down,“ Peixoto, 39, fired back with a challenge: mixed martial arts fight in a regulation octagon, complete with referee and fans, according to the Diario do Nordeste.

The three-round bout was held in the early hours of Sunday in the town's sports centre, with a large, rowdy crowd egging the two rivals on.

Peixoto, an MMA fan fond of appearing in political ads with his grappling gloves on, entered the ring stamping on the mat and making a throat-slitting gesture in Da Silva's direction, a video of the fight posted online showed.