"NK conflict settlement has no need for new mediators" 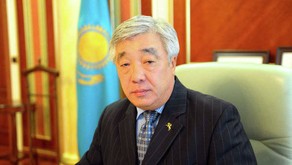 'There is no need for new mediators in settlement of Nagorno Karabakh conflict. Implementation of the OSCE Minsk Group agreement is enough'.

According to the Russian TASS, Kazakh Foreign Minister Yerlan Idrisov said at briefing in Astana.

'Special Minsk Group, co-chaired by the US, Russia and France, has been established in this regard. In my opinion, Nagorno-Karabakh conflict settlement has no need for new mediators', the minister said.