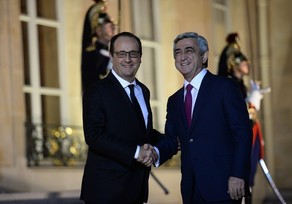 According to the Armenian media, press service of the Head of Armenian state declares.

The Presidents of Armenia and France stressed importance of unconditional implementation of the provisions set forth in the statements made during Vienna and St. Petersburg meetings.

The presidents exchanged views on the prospects for progress in the negotiation process.