​Sweden is a strong supporter of substantive agreement 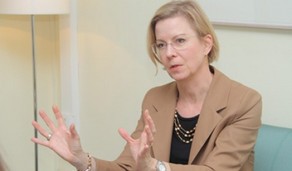 “Azerbaijan is a country that has a tremendous richness, when it comes to energy resources or oil exports, but of course the drop in oil prices have been a true challenge of the country and the economy. But maybe one can say that it is not only a challenge, but it is also an opportunity and I believe that was one of the main reasons behind of the start of the economic reforms in Azerbaijan”.

Ambassador Extraordinary and Plenipotentiary of Sweden to Azerbaijan, Tadzjikistan, Turkmenistan and UzbekistanI ngrid Tersman has stated in the meeting with the Caspian Energy’s delegation headed by President and Editor-in-Chief of Caspian Energy International Media Group Natalya Aliyeva.

In the course of the meeting the sides touched different topics of cooperation within the framework of the Caspian European Club (Caspian Business Club) and Caspian Energy International Media Group, as well as possibilities of extension of contacts on the informational level.

She expressed the hope and expectation that the reforms would be carried forward, so as to benefit the economic growth in the country, and to make Azerbaijan a country attractive for investors, because investors are looking for predictability, transparency and for equal treatment on the market. “And if this is what the reforms will help with, then investors will be interested and it will help to diversify the Azerbaijani economy. And if that happens, also Swedish companies will be interested, they are already interested, but the interest will grow up”, she noted.

“It is one of the reasons why EBRD and also other international financial institutions are supporting project on construction of pipelines. I think that it is important for all of us and also for the Strategic Partnership in energy between EU and Azerbaijan”, the Ambassador emphasized.

“There might be an opportunity for Swedish companies especially supporting the construction, delivery of energy, engineering, services and security because we have really good expertise, and our companies are very good in solving complex problems”, she continued.

When it comes to a new legal framework between Azerbaijan and European Union, Sweden supports that whole heartily, Tersman noted. “We are looking forward to the beginning of the negotiations of these relationship between the EU and Azerbaijan and from the Swedish side we hope, that the agreement will be reached, will be substantive and broad, and will cover a number of areas, both when it comes to economic cooperation and opportunities and also that it will focus on areas on values that we together shared. So when Foreign Minister of Sweden Margot Wallström was here in March, she was very clear that Sweden is a strong supporter of the good and substantive agreement between European Union and Azerbaijan”, Tersman concluded.