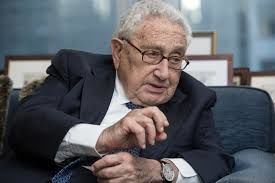 In the fifth month of Russia's large-scale military intervention in Ukraine, there are three options for ending the war.

Axar.az reports that this was said by former US Secretary of State, famous strategist Henry Kissinger.

"The first option: Russia will occupy 20% of the territory of Ukraine, including most of Donbas, as well as a strip along the Black Sea. Such an option would be Russia's victory. In this option, the role of NATO will no longer be so important.

The second option: An attempt will be made to push Russia out of its occupied territories, including Crimea, by February 24, 2022. In such a case, the West will face an open war with Russia.

Option three: Returning Russia to the front line on February 24, 2022. In this case, Ukraine will rearm and, although it will not be part of NATO, it will be closely connected with it.

In this case, NATO will be strengthened by the membership of Finland and Sweden, which will create an opportunity for the defense of the Baltic countries. "Ukraine will have the largest ground forces in NATO-affiliated Europe," Kissinger said.