French Embassy will open a book of condolences. 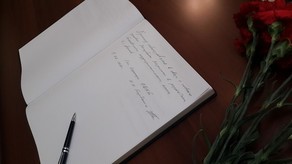 "Turkish Airlines' will carry out the flights from BakDue to the Nice attack, the French Embassy in Azerbaijan will open a book of condolences.

The terrorist attack committed in Nice by Frenchman of Tunisian origin, killed 84 people and injured more than 100. Islamic State took responsibility for the attack.

Due to the attack, France declared a three-day mourning starting on July 16.