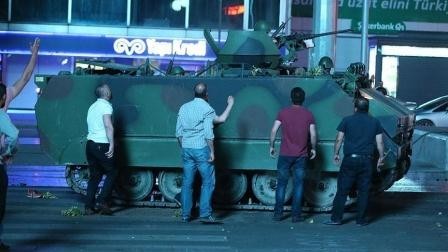 "On Turkey and the world: In a democracy the government is changed by a vote of the people," Morales said on Twitter.

He also lamented the deaths of dozens of people who were killed when fringe elements within Turkey’s military attempted to wrest control of the government.


Other Latin American countries that are no strangers to coups expressed support for the government of Turkish President Recep Tayyip Erdogan and urged respect for the constitutional order and institutions.


The foreign ministry of Venezuela urged a peacefully resolution to political differences within the framework of respect for the country’s laws and Constitution.


"Venezuela rejects the attempted violent overthrow of the legitimate current President of Turkey ... which ignores the will and democratic vocation of the Turkish people,” it said in a statement.


In Argentina, which has seen no less than six coups in the 20th century dating to 1920 and most recently in 2002 with the very brief removal of the popular Hugo Chavez, that country’s Foreign Minister Susana Malcorra said events in Turkey are being closely monitored.


"We hope the situation will be resolved peacefully within the framework of the constitutional mechanisms, the full functioning of the institutions and respect for human rights," she said in a message on Twitter.

Similarly, Mexico said that constitutional subordination of all state institutions to legally constituted civil authority is an essential element of democracy.

"Brazilian government calls on all parties to refrain from violence and recalls the need for full respect for the institutions and the constitutional order," Foreign Minister Jose Serra said in a statement.


Guatemala and Ecuador rejected any action that endangers democracy, peace and stability in any nation,while urging an immediate return to normalcy in Turkey.


And the 12-member Union of South American Nations, or UNASUR, said the coup attempt was a threat to all legitimate democracies around the globe.


The coup was quickly repelled with the government retaking control within hours.