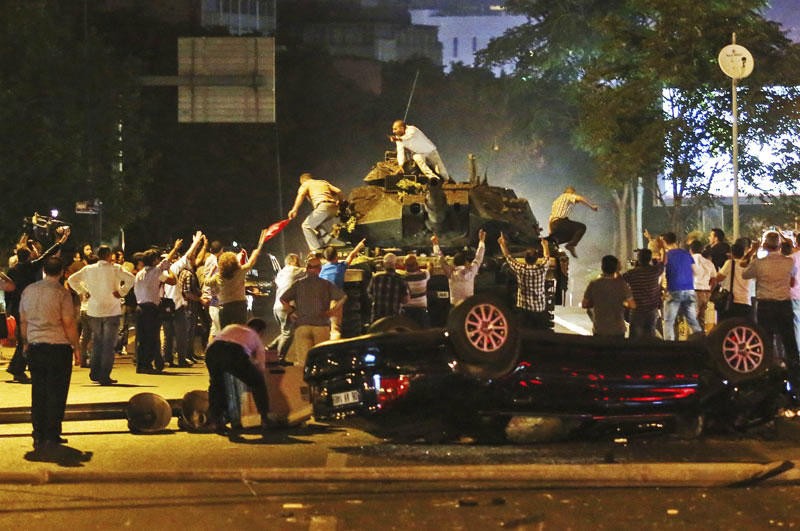 July 16 turned out a true victory of the national democracy in Turkey who woke up to a morning making a real history.

The failed coup attempt in Turkey once again reminded of a win of democracy traditions and strong will of the nation to defend the statehood. The people were fighting for the future of their state, well-being and most importantly, the future of its children.

It was like a nightmarish deja vu for the Turkish people, who has faced several military interventions in politics, and seen four coups over the past 50 years, to live through the atmosphere of a coup attempt again. Friday’s coup attempt began with the partial closure by troops of two major bridges over the Bosphorus in Istanbul.

Their immediate goal was to seize control of key areas like the Bosphorus Bridge or Taksim Square, storm the Presidential Palace, the Prime Minister's office, the National Intelligence Organization and in some areas, seize control of telecommunications hubs.

The parliament has been bombed, the Turkish general staff headquarters were occupied, top military commanders were detained, TV stations were taken over, while at least 290 died and more than 1,400 were wounded as a result.

But the coup attempt crumbled thanks to quick reaction by President Erdogan, who urged people to take to the streets to protest against what he described as a coup attempt by a minority faction within the military, vowing that it would meet with a "necessary response".

In its modern history Turkey has faced four coups, two of them forcing a change of government without taking over. All coups had huge and grave consequences, and shattered many lives, throwing the back country for several decades.

President Tayyip Erdogan and Prime Minister Binali Yıldırım named Fethullah Gulen, the Islamist ideologue living in the U.S., as the mastermind of the failed coup attack. There is a suspicion that some officers were approached by the Gulen group to take part and agreed out of their dislike of Erdogan.

While the government has been keen to suggest a small band of militaries were behind the coup, emerging reports and the released names of military figures linked to the plot suggests it ran much deeper, as among those detained were top military commanders.

Some 7,500 people detained in Turkey in connection with the military coup attempt, said Turkey’s Prime Minister Binali Yildirim as he was addressing the meeting of the country’s Cabinet of Ministers on July 18.

A successful overthrow of President Erdogan would be another seismic shift in the Middle East, which still suffers from the Arab uprisings erupted years ago and Syria’s civil war. Turkey is a NATO member and hosts U.S. military bases. The country is also a key partner in Europe’s attempt to stop migration flows, an important energy link between Europe and Asia, along with its key transportation position.

Since the beginning of the year, Turkey has been repeatedly hit by suicide bombers, has a civil war on its border and is a front for the war against terror. But the country stood strong and starting this June began to regain its friends, with whom it had strained ties over the past few years. Some experts argue that followers of Gulen decided to make this move as a “last chance” to take the state apparatus under control.

Thus, democracy and people have won in Turkey with the defeat of the coup attempt, while world leaders have unequivocally condemned the attempted military coup.

Azerbaijan’s President Ilham Aliyev sent a letter to his Turkish counterpart Recep Tayyip Erdogan, saying that the coup attempt is a terrible crime against Turkey’s statehood, on the other hand, against the people of Turkey, its will and choice.

“The Azerbaijani people and state, which always stand by the Turkish people and state, strongly condemn this crime against the Constitution and democracy of Turkey and consider it unacceptable,” said the letter.

U.S. Secretary of State John Kerry on Saturday said the U.S. opposed any attempt to overthrow a democratically elected leader and change must come through a constitutional process.

The only good to come out of the coup attempt is a ‘New Turkey’, where people did not afraid to support the government, where APK supporters and those who didn’t agree with the ruling regime stood next to each other to stand against the coup attempt and where the unity was shown by all parties in parliament to defend democracy together - a rare sight indeed.

The government of Erdogan, whose party scores over half of votes in all elections, proved that it is in a stronger position than previous civilian administrations, with the president’s position shored up during a decade of economic success.

The Turkish people have come out victorious in the battle against anti-democratic forces. But they still need to remain vigilant and the presidential administration warned about possibility of new attempts.