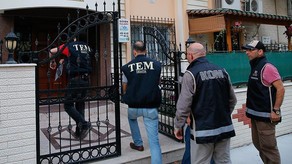 Operations conducted by the police officers in Izmir due to the attempted military coup by the Gülenist Terror Organization (FETÖ) have arrested 11 lawyers.

According to the Turkish media, the lawyers were detained during searches of 25 addresses. They are assumed to be involved in FETÖ.

The report said that during the searches in their apartments and workplaces, documents of the organization and various programs were seized.

14 more lawyers, who were decided to detain, are wanted.