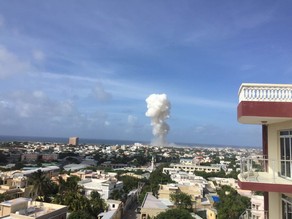 At least 13 people dead, 5 injured after two suicide attacks in the area of Somalia's Mogadishu airport.

According to the information, two vehicles packed with explosives were detonated in Somalia's capital Mogadishu near a base for African Union troops next to the main airport.

The al-Shabab armed group told Al Jazeera it was responsible for the attack.

Two blasts followed by gunfire were heard near the entrance of the main airport in the Somali capital Mogadishu.

According to the foreign media local witnesses said.

Other witnesses said there were double terrorist attack at the entrance to the airport.