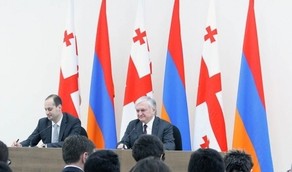 Armenian Foreign Minister Edward Nalbandyan has discussed the situation around the Nagorno-Karabakh settlement with his Georgian counterpart, Mikheil Janelidze.

RIA Novosti reports that the meeting of the foreign ministers took place in the framework of E. Nalbandyan’s visit to Georgia.

The ministers discussed results of the meetings between Azerbaijani and Armenian Presidents in Vienna and St. Petersburg.

"We agreed that the problem can be solved only by peaceful means", said Nalbandyan.