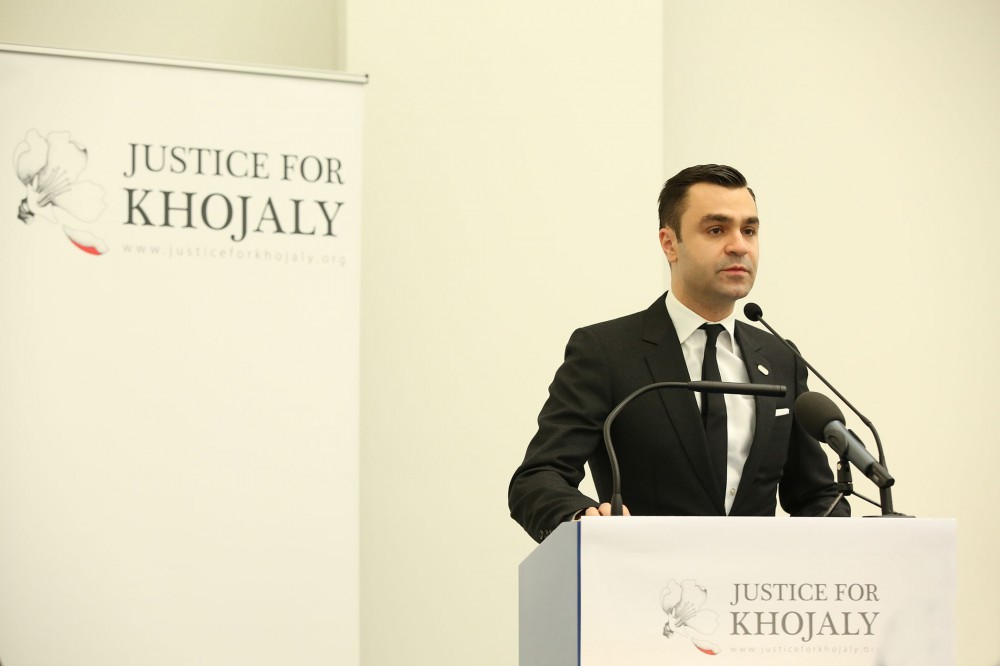 An academic debate took place at Humboldt University in Berlin on the Armenian-Azerbaijani Nagorno-Karabakh conflict. The event commemorated the victims of the Khojaly Massacre in 1992.

Speaking before the audience of 200 attendees, including politicians, VIPs and press representatives director of the European Azerbaijan Society (TEAS) in Germany Shahin Namati-Nasab explained: “TEAS is proud to organize this debate within the “Justice for Khojaly” campaign, which is an international awareness campaign initiated by vice-president of the Heydar Aliyev Foundation Leyla Aliyeva. The “Justice for Khojaly” international awareness campaign was launched on 8 May 2008. The campaign`s rapid development is a measure of international support for the restoration of justice in the region. This support has been expressed at events in over 100 countries in Europe, America, Asia and Africa, and has come from individuals and international organizations, as well as states. This year, TEAS is organizing events within the “Justice for Khojaly” campaign in Strasbourg, Stockholm, Vilnius, Athen, London, Brussels, Paris, Istanbul and Florence.

Mr Namati-Nasab continued: “It is an immense pleasure to welcome the audience, including H.E. Parviz Shahbazov, Azerbaijani Ambassador to Germany; Bundestag members, especially Mr. Florian Hahn MP and of course, the main speaker tonight – Professor Johannes Rau – who is an expert on the complex situation in the post-Soviet Caucasus region, and particularly Azerbaijan`s Nagorno-Karabakh region and the seven surrounding districts, which remain under Armenian occupation. Today, we commemorate the 24th anniversary of the Khojaly Massacre and though many actions have been taken, the international community continues to ignore the ongoing Armenian occupation of Azerbaijani territories and the plight of the nearly one million Azerbaijani refugees and internally displaced persons (IDPs).“

Afterwards Ambassador Parviz Shahbazov explained the significance of the genocide and the ongoing occupation of the Nagorno-Karabakh and seven surrounding districts. The situation keeps hardly endurable but does not prevent Azerbaijan to be a stable and economic successful partner for Germany and Europe. Azerbaijan wants to take a positive character in the settlement of the conflict, although Armenia has to take over its responsibility and withdraw from Azerbaijan territory.

Mr. Hahn MP took up the relevance of Azerbaijan for Germany in his greeting and stated, Germany has to play a constructive part in the settlement – especially within the scope of its OSCE-presidency.

Finally professor Rau depicted in haunting words the horror of the genocide and highlighted that not only human lives were erased, but unimaginable cruelties have been committed. Beside the high number of death, there have been plenty of human rights violations. At this point, he described the perspectives of both, the Armenian offenders and foreign eye witnesses. It would be high time, that the crimes of Nagorno-Karabakh are solved and responsibility is taken, so that the relatives of the victims could mourn in a decent way.