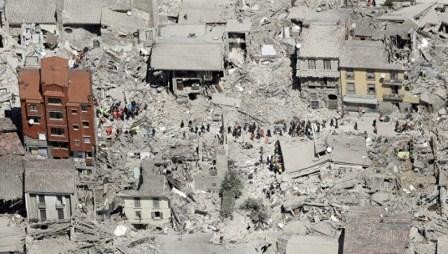 The provisional death toll from an earthquake that hit central Italy early Wednesday has risen to 73, the civil protection department said after receiving reports of verified victims, according to ANSA news agency. The 6.0-magnitude quake flattened mountain towns between Lazio, Umbria and Marche.

Of the victims, 35 were counted in the Lazio village of Amatrice, 11 in the nearby village of Accumoli, and 17 confirmed in a hospital morgue in the city of Ascoli Piceno. These include fatalities from the villages of Arquata and Pescara del Tronto, plus a little girl from Amatrice who was extracted from the rubble alive but died in hospital.

The earthquake, which struck at 03:36 local time and was followed by a second, 5.4 magnitude seism at 04:33 between Umbria and the Marche, was said by civil protection authorities to be "comparable in intensity" to the 2009 L'Aquila earthquake in which over 300 people died.

There were reports of "apocalyptic scenes" with many collapsed buildings in the towns and villages affected. Rescuers had difficulty accessing the area due to landslides and damaged infrastructure.

In Amatrice the missing reportedly included two refugees from Afghanistan, Sultana and Hahmed, aged 26 and 27, and three nuns and four elderly guests at a local boarding house. The hospital in the mountain town also had to be evacuated due to structural damage and was declared non-operational, but none of the patients were reported injured.

L'Aquila Mayor Massimo Cialente said 250 temporary homes built after the 2009 earthquake were available for the newly displaced. The Rieti provincial chapter of Italian blood donation charity AVIS has put out a call for people to donate blood for the injured.

A baby girl was pulled dead from the rubble of her home in the centre of Arquata del Tronto. The infant, who is reported to have been around nine months old, was with her parents who were rescued alive and taken to hospital with injuries.

In the Lazio village of Accumoli, the bodies of a young couple and their two children were recovered from the rubble of their collapsed home. Mayor Stefano Petrucci said 2,500 people are displaced from their homes, approximately 2,000 of them summer holidaymakers. "We will try to assist all of them, but it is better if they leave," he said. "The wound caused by the (2009) L'Aquila earthquake is still fresh, and we fear being forgotten…" the mayor added.