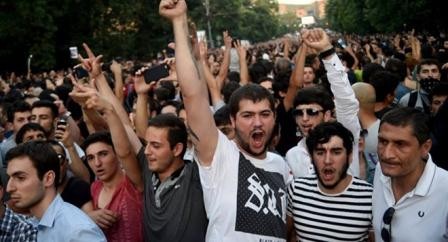 The relatives and supporters of the gunmen who seized the police building in Armenia in July and later surrendered to the authorities, are holding a rally near the country’s parliament building, News Armenia agency reported Sept. 13.

The protesters are trying to ask the MPs about the actions to be taken in connection with the "Sasna Tsrer" armed group members.

The armed group seized the headquarters of the police and interior troops in Erebuni, Yerevan, July 17, demanding the release of the participant of the Nagorno-Karabakh conflict, coordinator of the oppositional Armenian civil initiative ‘Founding Parliament’ Zhirayr Sefilyan.