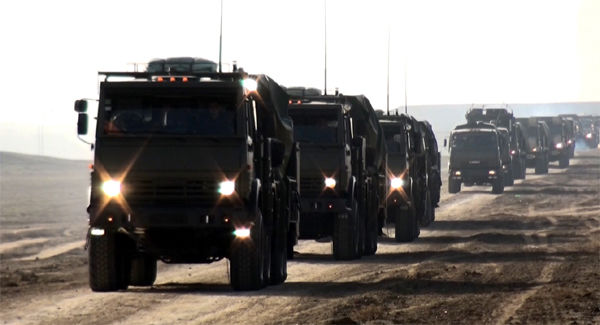 Main stage of large-scale exercises with live-fire, conducting according to the plan approved by the President of the Republic of Azerbaijan, Supreme Commander-in-Chief of the Armed Forces, Ilham Aliyev are held.

In accordance with the plan of the exercise, all branches of Armed Forces started tactical actions to carry out the training and combat tasks with the practical use of weapons and equipment.

Characteristic features of these exercises are the efficiency of information gathering, its processing and considering the new challenges of rapidly changing situation with extensive use of electronic, computational, visual and other modern technology, which allows to have observation inland, at sea and in the sky.

Effective use of troops, as well as control systems in more closely interaction is carried out following the principles of modern combined arms battle in difficult terrain and considering the possible actions of a conditional enemy.

Shootings, military units and fire maneuver are carried out in different fire grounds, areas and other equipped places.