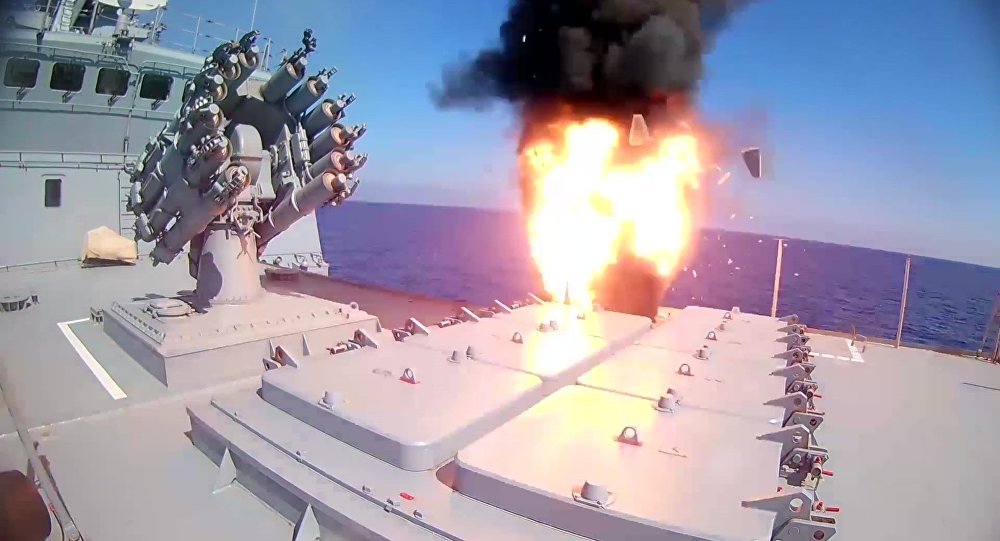 A Russian Black Sea Fleet warship launched strikes with cruise missiles on ISIS targets in Syria as part of the operation to free Deir ez-Zor from ISIS terrorists, the Russian Defense Ministry said on Tuesday.

"On September 5, the Admiral Essen frigate of the Russian Black Sea Fleet that has been carrying out missions […] in the Mediterranean launched strikes with sea-based Kalibr cruise missiles on ISIS terrorist group targets near Deir ez-Zor. Kalibr cruise missiles were launched on verified ISIS targets based on information received by means reconnaissance from several channels."

As a result, dozens of terrorists were eliminated, as well as ISIS command posts, a communications center, a facility repairing terrorists' armored vehicles, arms and ammunition depots were destroyed in the vicinity of Deir ez-Zor, the ministry said. The effectiveness of the missile strike was confirmed by UAV reconnaissance.

The missile strike thwarted terrorists' plans to regroup and boost their positions near Deir-ez Zor, which has been besieged by ISIS since 2013.

"The launches of Kalibr cruise missiles ensured the advance of the Syrian government forces, as well as thwarted plans of ISIS militants in the area of Deir ez-Zor."

The Syrian army supported by the Russian Aerospace Forces has been advancing toward Deir ez-Zor from three directions as part of the campaign to free the city launched in August.

The Russian Defense Ministry announced on Monday that the Syrian government forces had driven ISIS terrorists out of key positions on the Palmyra-Deir ez-Zor highway.

Deir ez-Zor, located on the shores of the Euphrates River to the northeast of Damascus, and a military airfield near the city have been besieged by ISIS for over three years, with food and ammunition only being delivered by air, while helicopters from the city of Qamishli have been evacuating the wounded and delivering essential supplies to the city's population.

The lifting of the siege of Deir ez-Zor will lead to the complete defeat of the most combat-effective formations of the ISIS terrorist group in Syria, the chief of the Russian General Staff's Main Operational Directorate said earlier.