Defense Minister threatens use of force against opposition 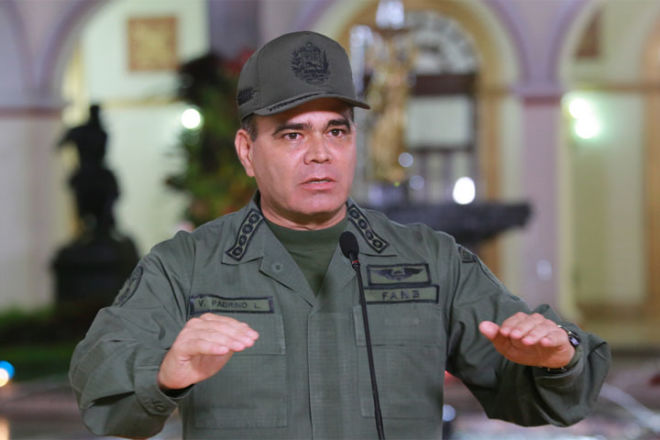 The Venezuelan government is ready to use force against the opposition participating in an attempted coup d’·tat, Venezuelan Defense Minister Vladimir Padrino Lopez stated on Tuesday.

"Those who will come to [the presidential palace] Miraflores for violence, will be defeated. If we have to use force, we will use it," the Nacional portal quotes Padrino Lopez as saying.

The defense chief added that the military officers joining opposition leader Juan Guaido have been "duped by the opposition".

Earlier on Tuesday, Guaido published a video on Twitter, in which he urged the Venezuelan military to take to the streets in order to "end the usurpation" in the country. A group of military officers and head of the Popular Will party Leopoldo Lopez also appear in the video. There have been reports of shooting and release of tear gas near the road leading up to the Francisco de Miranda Airbase in Caracas, where Guaido recorded the video.

Juan Guaido, Venezuelan opposition leader and speaker of the National Assembly, whose appointment to that position had been cancelled by the country’s Supreme Court, declared himself interim president at a rally in the country’s capital, Caracas, on January 23. On the same day, the United States recognized him as an interim president, and the countries of the Lima Group (excluding Mexico) and the Organization of American States followed suit. Venezuela's incumbent President Nicolas Maduro blasted the move as an attempted coup and announced cutting diplomatic ties with the United States.