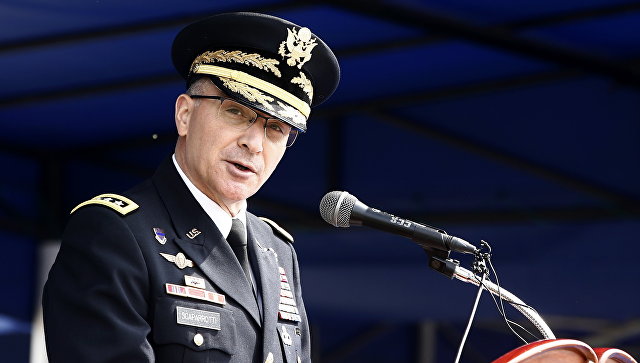 The United States is installing new military leadership in Europe at a moment of heightened worries about Russian aggression, doubts about the future of arms control and rising tensions among NATO allies.

Axar.az reports citing Spectre news that, these pressures are reflected in stepped-up U.S. military maneuvers in Europe, including the unusual simultaneous deployment last week of two U.S. aircraft carrier strike groups in the Mediterranean Sea. At the same time, the Russians are rattling nerves with talk of fielding new "doomsday" weapons such as a nuclear-armed undersea drone and making moves seen by some as risking escalation of the war in eastern Ukraine.

In ceremonies in Germany on Thursday and in Belgium on Friday, Air Force Gen. Tod Wolters will take over for Army Gen. Curtis Scaparrotti in the dual roles of NATO's Supreme Allied Commander Europe and head of U.S. European Command. Acting Defense Secretary Patrick Shanahan had planned to attend the ceremonies but canceled just hours before his scheduled departure from Washington on Wednesday. A Shanahan spokesman said he decided he should remain in Washington for consultations with the White House and the State Department on the crisis in Venezuela and the situation on the U.S.-Mexican border.

Scaparrotti, who is retiring, spent his tenure's final months dealing with U.S.-Turkey tensions triggered by Turkey's decision to buy a Russian S-400 air defense system. The U.S. and other NATO allies see the deal as incompatible with Turkey's continued participation in the Pentagon's F-35 stealth fighter program, and even its future in NATO. The two countries have been sharply at odds over U.S. support for Kurdish fighters in Syria.

Wolters has made clear his view that the fielding of a Russian air defense system by a NATO ally is unacceptable.

"If Turkey proceeds down a path to procure and operate the S-400, they should not get the F-35," he said at his Senate confirmation hearing on April 2. "I would contend that we all understand that Turkey is an important ally in the region, but it's absolutely unsustainable to support co-location of the F-35 and the S-400."

Wolters, a fighter pilot by training, had most recently served as commander of U.S. Air Forces in Europe and head of NATO's Allied Air Command.